We constructed a tunnel below the lower end of Albert St that will make Britomart a through tunnel to the Aotea Station - that station is presently being built with entrances at Wellesley and Victoria Streets.

Now the lower end of the Albert Street work has been finished, CRL has transformed that section into a high-quality public space for people and businesses.

We have widened the footpaths, planted trees, added bus lanes and made the street more pedestrian-friendly.

The City Rail Link (CRL) is New Zealand’s largest transport infrastructure project ever and a game-changer for Auckland.

The CRL is a 3.45km twin-tunnel underground rail link up to 42 metres below the Auckland city centre. It will transform the downtown Britomart Transport Centre into a two-way through-station that better connects the Auckland rail network and will enable the rail network to at least double rail capacity.

CRL will extend the existing rail line underground through Britomart to Albert Street, Vincent Street and Pitt Street. The railway will then cross beneath Karangahape Road and the Central Motorway Junction to Symonds Street, rising to join the western line at Eden Terrace.

Two new stations with underground platforms will be built at Albert Street (entrances on Victoria and Wellesley Streets) and Karangahape Road (entrances Mercury Lane and Beresford Square) and Mt Eden Station is being redeveloped to include the new CRL line and a modern station building. Wider rail network improvements are also being done at The Strand, Otahuhu, Henderson and Newmarket.

Transforming the Britomart precinct into a modernised transport centre 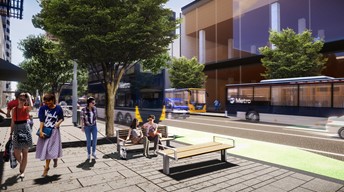